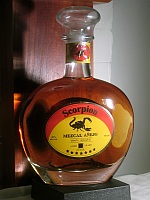 Notes: This mezcal is produced in Oaxaca, the traditional area in Mexico for mezcal. This is one of the Anejo expression of this particular mezcal line - all of which are single barrel bottlings of 100% agave. This Anejo (aged) version spends three years aging in a oak barrel of less than 200 liters.They also import numerous other mezcals that we will be reviewing (see our reviews of the Scorpion Silver, Scorpion Reposado, Scorpion Anejo One Star, Tejuana Silver, Tehuana Anejo, Embajador Silver, Embajador Anejo, Don Juan Escobar Reposado, Mistico Silver, and Mistico Reposado).

Appearance: Tawny, Russian gold or Baltic amber. On swirling, it leaves a very light coating on the glass which belies its viscosity. Sitting in the glass, it looks like a small puddle of sap or nectar.

First Impression: Smoky, phenol and and brine. Damn near ethereal compared to most mezcal.

Taste: Smoke, aloe and iodine. Much more understated than any of the others a marked contrast to the 5 year old. A eminently civilized, if tame expresion of a mezcal.

Drinks: Don't even think about mixing it.

Cigars: Good with a medium-bodied cigar.

Bottle: Ovoid Rounded glass decanter with glass stopper and heavy crystal bottom- looks like a XO cognac of fine brandy bottle. Red and yellow label (Mexican flag colors). Has a tiny sombrero hanging from it. I usually take that as a warning sign if I see things like that, but in this case it does make the bottle easier to find.

The scorpion on the label makes it easy to see and of course, the scorpion in the bottle is kind of a stand out (see photo below). They use extra large scorpions for the premium bottlings of Scorpion Anejo Five Star and Scorpion Anejo Seven Star. (Don't worry, it's only an exo-skeleton without a stinger!) The bottle fits nicely in the hand when you grip it- the decorative impresions at the top and bottom of the main area provide a nice tactile feel. Nice balance to it.

Final Thoughts: A very interesting example of what a mezcal can be. Maybe a touch tame for those want a more expressive mezcal, but refined none-the-less. Most expensive mezcal out there outside of the Pechuga bottlings. Very good but pricey.

Fast loading with a display of all the Mezcals they import (more than twelve!).
Basic information and pictures of each one, with reviews and ratings by different people and organizations. Rather basic, but functional. They spent the money on what is inside the bottle, and not slick web page programming. 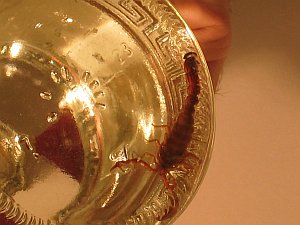