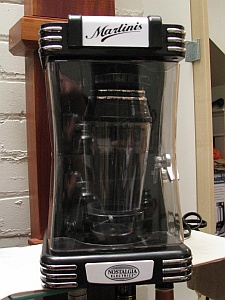 OVERVIEW: Made by Nostalgia Electrics who make a wide variety of bar and food appliances. This is the second electric martini maker we have 'field tested' recently (not counting a 1960's battery powered Drink-o-Mat) and we tried to run them thrlough the same tests and judging criteria.

Appearance: The Nostalgia machine is made to resemble something from the 1950's but also sports a wrap around sheild with a interlock latch (something one would never see back then) and is an all-plastic constuction for the most part. Looks like a cross between a milkshake machine and a paint mixer. But is tyled to have a 50's sleek look so if this is your decorating motif it will fit right in. Small foootprint- not a counter hog has suction cups to maximize hold and minimize bounce ,rattle and movement..

First Impression: Vague and somewhat incomplete directions, shields and seals are tricky and require attention (separate flyer included in directions so obviously this has been an issue). Shaker is stable, relatively quiet. Easy-to-set up.

Testing: We followed the simple directions, filled with ice and our martini ingredients. Someone has a sense of humor as when you push the on/off button to turn the machine on the green olive on the martini graphic (just above the switch) lights up.

Not as many options as the Waring machine, as this had a shaken only mode (no stirred option) and did not have a automatic timed cycle (which can be a positive or negative depending on your point of view). It did however say not to run the machine longer than 45 seconds at a time. On the plus side it allowed you to chose a wide range of shaking cycles both in speed and intensity to dial in.

We tried a stirred gin martini. We had some trouble with the plastic latch ring to fix or release the the shaker until we got the hang of it, same thing with the shield, took some fiddling and fussing to get the latch engaged and the bottom blue light to come on. We then dialed up the shaken setting to maximum and watched the show. . .

The machine then proceeded to enthusiastically pump the shaker up and down a couple inches each way and did a nice job of shaking/chilling the martini. After a 45 second cycle, the martini was nicely chilled - and this was not even with the shaker prechilled.

In the second trial, we poured in the ingredients for a Black Pagoda (basicly a Perfect Manhattan with a Cognac base) while not as showy (drink mix was somewhat darker) it did a credible job of mixing the ingredients.

Noise was minimal and easily ignored (on the other hand kind of amusing to listen and watch with the under lighting and all).

Plastic shaker with strainer and cap parts. Positive is that when the interlock is engaged and you are using clear ingredients it lights up nicely and puts on a show especially with good ice. Negative is that the plastic shaker could get scratched up, the cap is not useful or marked for measuring, and you have to be careful about all the seals so it doesn't leak.

Final Thoughts: While not as serious a machine as the Waring Martini Shaker, it is between 1/4-1/2 the price and so for a casual gift it is certainly nice and a lot of fun. More of a amusement than a serious machine.We do have reservations as to how long it would last compared to the Waring as the construction is definitely cheaper but if it is not used much it should be fine.We found it to work as described. Unlike some earlier incarnations and attempts at a automatic cocktail shaker this one actually works reasonably well at shaking cocktails (most of the earlier ones only stirred them). An amusing toy for the lazy bartender or host!

While we strongly suggest Gary Regan's Cocktails in the Country to learn proper manual, old fashioned (and fun ) bartending, this is a decent machine for those who can't or don't want to shake or their cocktails themselves and amuse their friends in the process.

One positive we found with these machines also is that people enjoying using them so they make their own cocktails and allow you to socialize more.

Yes, we get a small percentage if you order it here (helps support our site). No, we wouldn't sell out for the money.