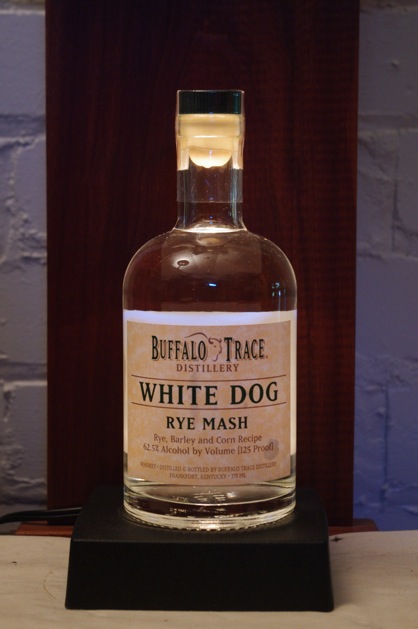 Notes: This is one of the newest products from Buffalo Trace along with their rye white dog reviewed here . Following last years' launch of their first white dog - White Dog Mash # 1 - (formerly only available from the distillery gift shop - and now in stores) which by most accounts was wildly successful, they decided to follow up with the latest releases, both of which have different ingredients or mashbills.

This is the distillate that comes off the still at Buffalo Trace at barrel strength. They use corn, wheat and barley in a rye whiskey mashbill (recipe) as a base and rather than age it, bottle it at the proof it came off at directly to preserve the full on white rye whiskey taste. It differs from some others who use who use either a rye (10-30 %) usually traditional bourbon mashbill (which must be at least 51% corn, by the way).

Their many other products include a wide range of bourbons and ryes and their antique collection which is a (at least) yearly collection of small batch products . The following are a few links to reviews of their products we have done: Ancient Age, Ancient Ancient Age, Eagle Rare 10 year-old, Eagle Rare 17 year-old, Blanton's, Rock Hill Farms, Hancock Reserve, Elmer T. Lee and their Wheated Bourbon Series; W. L. Weller Special Reserve,and W. L. Weller 12 . (See our Adventure Section for a tour of the distillery).

Appearance: Very thin edge line on the glass when you swirl it, smooth layer of whiskey on swirling, after quite a bit of time some scalloping, then a few thin legs and finally very small droplets forming at the edgeline.

First Impression: Grain, almost bready, wheat germ or gluten like but less sweet than a number of others. some sweet, and spicy underlying the wheat bouquet. (Note this is 114 proof so sniff carefully and no smoking while drinking).

Taste: Smooth start, a bit light on the palate. Finish is medium short , quite smooth (especially for 114 proof) Not a lot going on but pleasant enough.

Drinks: There is a dearth of drinks recipes for new make or white dog whiskey - particularly for a wheat version - most drinks are tailored to a heavier corn/sweetness profile. Think vodka color, Old Tom Gin in graininess with no juniper. Closest we can come to is a Genever (Jenever) or Roogenaar (similar to Genever) not that any of these comparisons is more helpful unless you are a Genever/Jenever aficionado.

Works nicely in a variation of a Tom Collins, Manhattan or a sour - we especially liked a Pisco Sour swapping out the Pisco for White Dog we call this variation The Pit Bull. We also found the this white whiskey worked well paired with seafood.

Cigars: Something mild but complex so as not to lose the nuances. A Fuente Work of Art, Rocky Patel or possibly a Ghurka. But keep the cigar and drink well separated unless you want to do a Richard Pryor impersonation.

Bottle: Short clear glass. Small size also makes it stand out. Simple paper seal is used instead of a neckwrap making it easy to open and the composite cork closure (what it lacks in character it makes up for in sealing).

Final Thoughts: A very mild white whiskey with a decent taste and smoothness. Think of it as a starter or gateway white whiskey - I won't go so far to call it light, but it is more a bit less of a challenge compared to some. Well made, but not particularly exciting. Price is good given quality and proof.

Good web site with easy navigation, cover all of their extensive whiskey collection and has links to the parent company (Sazerac) and their other offerings also.