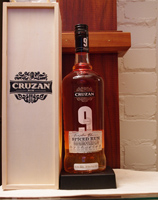 Notes: A rather late entry into the spiced rum market, Cruzan finally decided to enter the fray recently with their Cruzan 9 Spiced Rum. Cruzan has always been much more known for their many non-spiced rum products so this is a new direction for them. Somewhat higher proof than Captain Morgan or Admiral Nelson (both are 70 proof or 35%), sourced from the Virgin Islands but bottled by Jim Beam. The "9" comes form the use of 9 different spices-Allspice,vanilla, cinnamon, ginger, nutmeg, clove, mace, juniper berry, (hmm. . . add a little cardamom and we could almost call it a gin. . .).

Appearance: Clear, gold colored, no sediment whatsoever. On swirling, it leaves a thin, but tenacious clear coat on the inside of the glass, then develops long legs.

Taste: Lots of heavier types of spices and a tobacco/pepper char melange. Heavy bodied, somewhat sweet with a lot of pepper aftertaste. It does make me think of some sort of smoked gin.

Drinks: Can stand up to almost every other ingredient you throw at it in a umbrella drink. Less assertive than most spiced rums, in a positive way.
Might make a interesting alternative to a gin in the right drink.

Bottle: Clear glass semi-generic bottle like any number of other rum bottles (when they changed hands it seems they got away from their more distinctive recycled glass bottles). Simple stick on clear plastic labels on front and back which are silkscreened with a blue and black design. Has a large , distinctive number "9" on the front and also on the black screw top closure. Looks a lot like a Black Velvet bottle.

Final Thoughts: Frankly, I am not a flavored rum fan. I don't see the point. That being said, this is better rum than a number of the other flavored rums out there I have had in the past and not as heavy handed as some. Another point in its favor is that the rum has not been sweetened as much or doped with as artificial extracts/flavorings as some of the more popular ones. Also you are getting a higher proof for the same or less money than the ubiquitous Captain Morgan so we give it extra value points.

Slow-loading, simple navigation, but not a great deal of information - mostly video clips and the product descriptions have about as much info as a shelf talker.