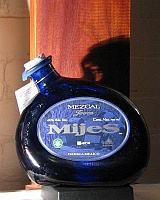 Notes: This mezcal is produced in Oaxaca, the traditional area for mezcal. But unlike many others is produced by a isolated native group that is distinct from every other in Mexico in language,culture and beliefs. The Mijes resisted both Aztecs and Spaniards successfully and maintain their cultural identity to this day. Made in traditional manner (and same as the ones they use in their religious ceremonies).

Appearance: Clear as molten glass in the bottle.It is a beautiful thing. On
swirling it leaves a very light coating on the glass which belies its viscosity sitting in the glass it looks like a small puddle of sap or nectar. Quite a striking contrast to most clear spirits such as vodka.

First Impression: Incredibly smoky, phenolic (iodine), some savory, lime, and unfortunately something akin to neoprene, and (unignited) molotov cocktail mix. Then a pineapple smell starts to develop and some sweetness as it aerates a bit.

Taste: Very smoky in a strangely charming sweet way with leather, tobacco oak, alkali. If other young mezcals could be considered similar to Islay single malt scotch, this would be a lowland. Sweet, earthy and savory notes and a lime, pineapple citrus with salt. Develops very quickly but smoke is sweeter than other mezcals.

Drinks: Despite our best efforts I found only one mezcal cocktail (in Gary and Mardee Regans New Classic Cocktails) I think however that there are some definite possibilities for substituting this for scotch in some cocktails to create a whole new family of cocktails-please see our mezcal recipe section for some of our ideas.

Bottle: Simple handblown bottle somewhat oval with a flared bottom with spout at 10 o'clock . Dark blue color to it and blue sealing wax. Label and bottle give it a somewhat antique or low tech feel to it but very distinctive and attractive package. Wax and cork seal is a major pain in the ass to open first time (cork too short to get good grip on).Otherwise nice presentation. Unlike a host of others no larvae or arachnids in it either unlike most others. Just good mezcal!

Final Thoughts: A very subtle mezcal especially for a Joven, Nicely done and a pleasure to drink, Mijes may change how you feel about mezcal.

Fast loading with a display of all the Mezcals they import (more than twelve!).
Basic information and pictures of each one, with reviews and ratings by different people and organizations. Rather basic, but functional. They spent the money on what is inside the bottle, and not slick web page programming.