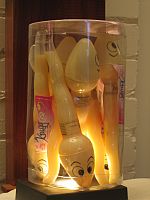 Note: Like all the spirits I review, this was tasted at room temperature for maximum taste and detection of any faults if any in a product. If you chill benzene cold enough, you could drink that too (NOT RECOMMENDED!), which is why I try them at room temperature.

Appearance: Milky, yellow off-white color,on swirling leaves a even coat on the glass.

Drinks: Makes a great substitute or base for eggnog or you can substitute it for the many recipes for other cream liqeurs. Good with vanilla ice cream or fresh cream as a frozen drink (similar to a Toasted Almond) or milkshake, even tried it in french toast. Made very nice drinks with armagnac, cognac and calvados (an LKA, ALK and ALKC respectively).

Other: Made in Germany. Banned at liquor trades show- even the Vegas show - that is a singular achievement in itself given some of the other products I have see.

Final Thoughts: As it says on the tag "I'm the newcomer!" A new product in the cream liqueur category for those with no shame. Buying someone a drink at the bar just gets to a whole different level with these. Good way to judge someone technique and/or sense of outrage depending. Great gift idea- just be careful they might take it the wrong way and get violent. Certainly makes a statement like no other (at least with your clothes on!).

Quick loading webpage with suggestive graphics, some information and e-cards to sendto your special friends- who may not talk to you again. . .